Fifth Disease: Learn How to Manage The Viral Rash in Kids

The fifth disease is one of the rash-forming diseases prevalent in children. Though the contagious medical condition is mild, parvovirus B19 causing the disease does not go away with medications but is preventable by isolation. The article discusses the ailment and its management while preventing its complications.

Children are prone to suffer from rashes as in the fifth disease across their bodies which are usually mild but may cause severe consequences in adults with co-morbidities. These are often contagious viral infections needing little care before the symptoms disappear.

But pregnant women and those with compromised immunity need medical attention until the symptoms disappear. So, doctors usually advise the patient to wait out the symptoms as there is no medication to shorten the infection’s course like any other viral disease. So, let us study the fifth disease management in kids and adults.

What is the fifth disease?

The fifth disease primarily affects school-age children appearing as bright red rashes on their cheeks, earning the nickname “slapped cheek disease.” The other name of the illness is Erythema infectiosum, caused by parvovirus B19 [1]. Moreover, the viral infection is contagious, spreading rapidly through coughing and sneezing. However, the medical condition is mild in children receding with little treatment.

But how the fifth disease got its name many years ago is interesting - it is the fifth among six rash-forming viral illnesses affecting children. The others in the group are:

What are the fifth disease causes, and who are the most vulnerable?

Though the fifth disease is common among children, it can affect anyone. The pathogen causing the disease is human parvovirus B19 which spreads quickly through saliva droplets and nasal secretions. That explains why the affected must remain in quarantine to prevent its spread till the virus completes its cycle and disappears.

The body’s immune system builds up defenses when exposed to the virus. Thus, the body fights off the virus, and exposure in childhood provides immunity in adulthood. But there are exceptions, and adults get the disease through contact, coughing, and sneezing. For example, the virus travels through a pregnant woman’s blood to the fetus resulting in complications. But what rings the alarm bell to look for a pediatrician? Let us find out. 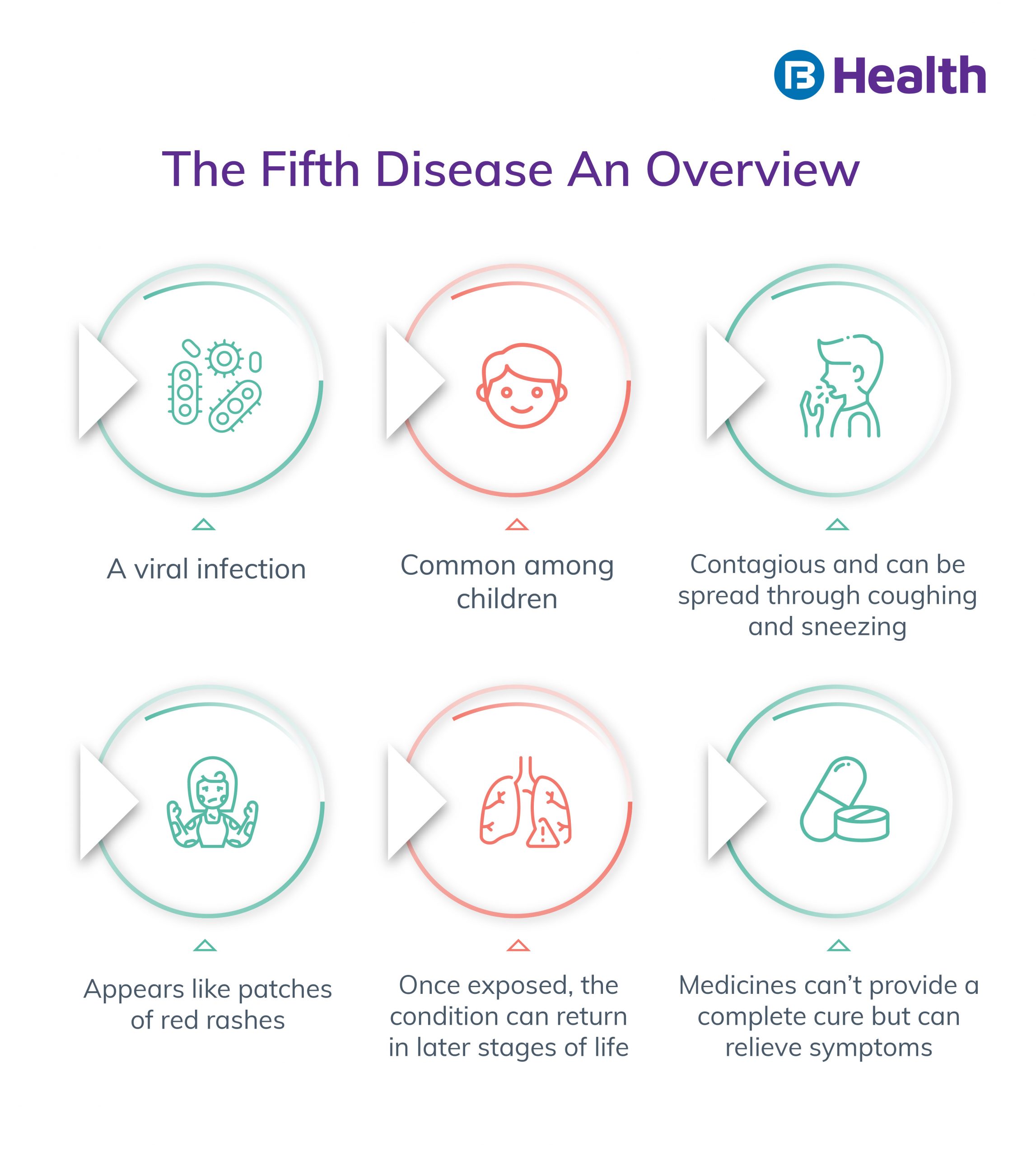 What are the fifth disease symptoms?

According to the Center for Disease Control and Prevention, the fifth disease symptoms appear between 4 and 14 days after exposure to parvovirus B19 pathogen. The first signs are the sudden appearance of bright red fifth disease rash across the cheeks as if slapped. However, children may suffer from mild fever and cold symptoms before the rashes break out. Moreover, nearly 20% of the fifth disease affected do not show signs but can still infect others.

The virus is most contagious during the first few days of exposure showing flu-like symptoms. So, the indicative but discernible fifth disease symptoms are:

The fifth disease rash lasts 7 to 10 days, after which the children are no more infectious and can return to school unless they have immune problems. However, developing the secondary rash is not uncommon, appearing in other body parts like:

Secondary rashes are usually itchy, especially on the soles of the feet, causing discomfort but varying in intensity for up to 10 days. Sometimes, it may linger for several weeks. In addition, nearly 80% of the fifth disease infected suffer from joint pain in the hands, wrists, and knees besides swelling. It is called polyarthropathy syndrome and is common in adult women. Though the swelling can last up to a few months, it goes away without any long-term implications.

What are the fifth disease complications?

The fifth disease is usually mild for healthy children and adults. Still, it can cause severe complications for people with weakened immunity due to illnesses like cancer, organ transplant, or HIV infection. In addition, it needs professional medical help to recover, and a pediatrician can treat infected children. Thus, the following complications need medical supervision before the patient recovers fully without any long-term effects.

The fifth disease affects the production of red blood cells leading to anemia. Though the condition is temporary, it may cause severe harm where the immune system is weak. Thus, people with the following are most at risk:

Nearly 10% of children and 80% of adults suffer painful joint swelling due to the fifth disease [2]. The painful condition disappears in a couple of weeks. However, some may develop chronic polyarthritis after recovery, and women carry a greater risk than men.

Pregnant women are vulnerable to the fifth disease’s effects as the fetus gets infected through the blood. Though the infection does not cause congenital or developmental problems in the embryo, it is prudent to seek online doctor consultation to cope with the following:

So, the doctor may advise additional monitoring for pregnant women, which includes:

Moreover, developing the fifth disease during pregnancy can be dangerous if the growing fetus contracts a severe form of hemolytic anemia. In the worst-case scenario, it may lead to hydrops fetalis, needing intrauterine blood transfusion through the umbilical cord to protect the developing baby from the disease.

On the upside, most pregnant women survive the fifth disease to deliver healthy babies despite the risks. 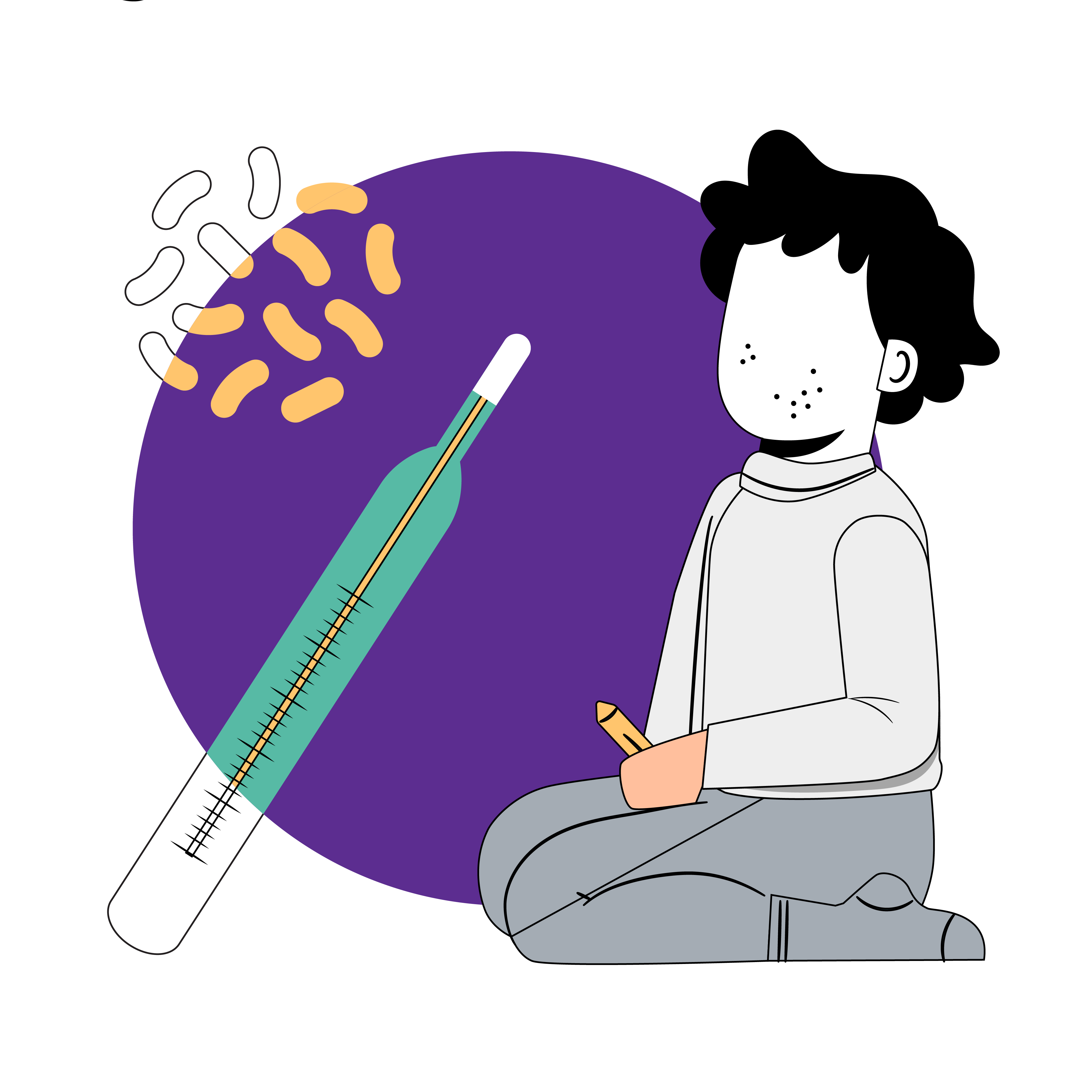 How is the fifth disease diagnosis made?

Calling the pediatrician when the child shows symptoms similar to the fifth disease is crucial for its diagnosis and treatment. So reaching out to the healthcare provider in time is critical to avoid complications, howsoever remote. Moreover, reach out in the following conditions at the slightest suspicion of the fifth disease.

Parvovirus B19 spreads through the pregnant women’s blood and blood products affecting the unborn child. So, the blood test can confirm whether the patient is immune to the virus or recent infection. However, the blood test is not routine and needs exceptional circumstances to perform. Therefore, pregnant women must consult their obstetrician immediately upon exposure to parvovirus B19. However, natural immunity to the virus grows once you recover from the fifth disease.

How do you prevent and treat the fifth disease?

Parvovirus B19 causes the fifth disease infection and spreads rapidly. So, prevention is the best method to control the disease without a specific vaccine or medicine. You can reduce the chances of infection by following a few under-mentioned rules:

Since antibiotics do not affect parvovirus B19, causing the fifth disease, doctors usually prescribe medicines to provide relief from the fifth disease symptoms like an itchy rash, painful joints, swelling, fever, and headaches. The OTC medicines commonly used are:

The doctor must answer a few queries to ease the fear generated when children and adults contract the fifth disease.

Although the red the fifth disease rash appears intimidating, the medical condition has no long-term consequences clearing off with little treatment and rest. However, the disease can be dangerous if the body’s immune system is weak due to HIV, chemotherapy, or other ailments. On the other hand, explore Bajaj Finserv Health to gain valuable insight into the infection and learn how to manage the fifth disease and prevent its spread. In addition, consider seeking professional advice as the body fights the virus to build lifetime immunity from the disease. 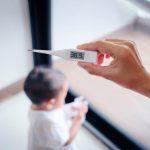 Febrile Seizure in Children: Its Causes, Symptoms and Treatment

Fifth Disease: Learn How to Manage The Viral Rash in Kids

Newborn Cough and Cold: 5 Important Things You Should Know