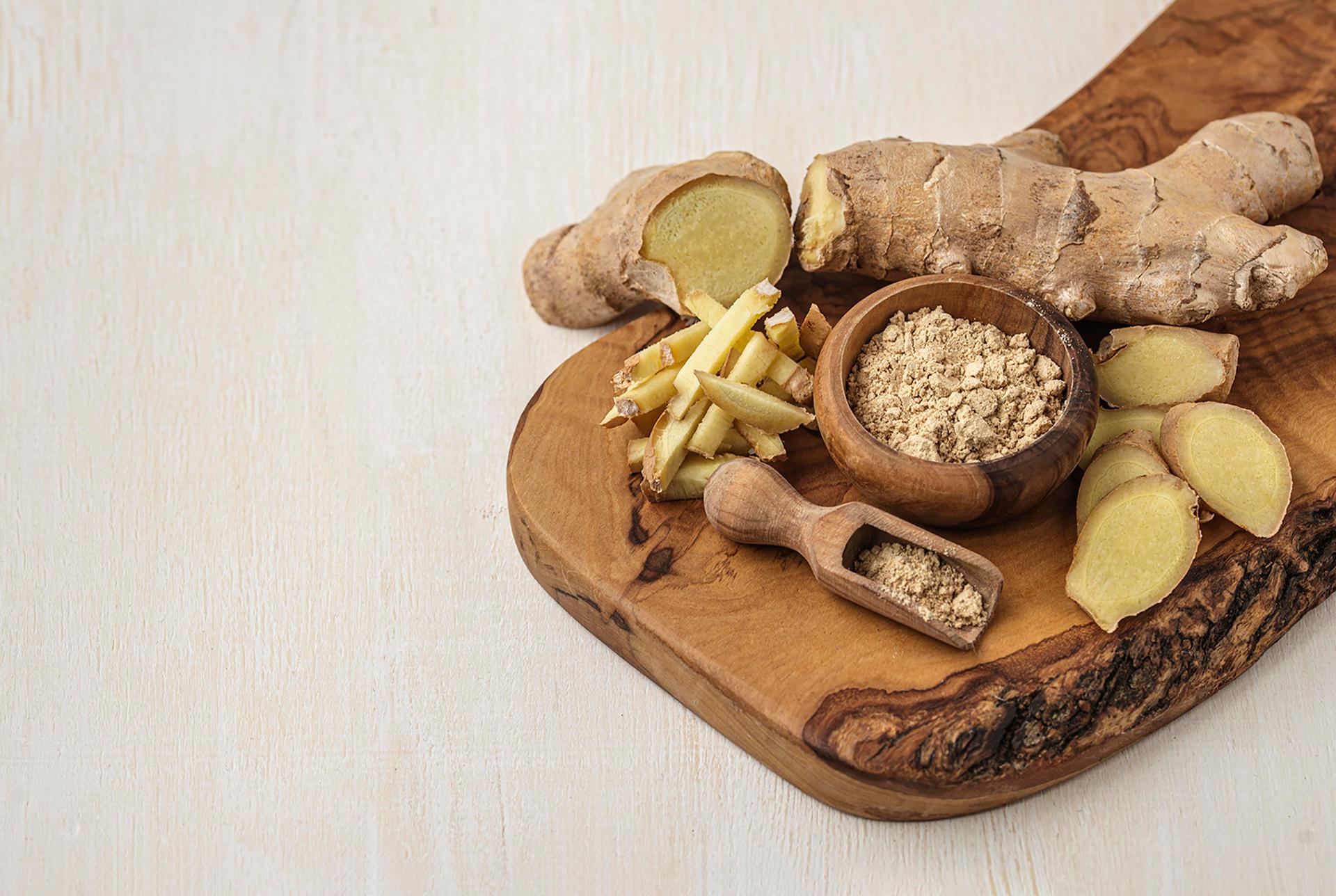 Apart from being a widely used spice in India, ginger has been used for its medicinal properties for hundreds of years. In fact, this plant is key to traditional Chinese medicine, as well as Ayurveda. It is believed that even 2000 years ago, the health benefits of ginger were known, and it was widely used as a remedy to settle an uneasy stomach. The best part is that you can consume ginger fresh, dried and powdered, or in the form of an easy-to-eat capsule. Whichever way you choose to eat ginger, know that it does your health a world of good, especially your immune system. Here’s all you need to know about ginger health benefits.

Ginger is valued not just for the division mentioned above but also for the variety of vitamins and minerals it contains. These consist of the following:

Gingerols, an active ingredient found in ginger, is well known for guarding the mouth and halting the development of oral bacteria.

Periodontal disease, a severe gum disease, could be brought on by the growth and spread of these bacteria in the mouth. Ginger not only gets rid of bacteria but also makes your teeth look whiter.

Because of this, it serves as a perfect alternative to several medications that could have adverse effects.

Aids In The Fight Against Infections

Infection risk can be decreased with gingerol. Moreover, ginger extract has the ability to prevent the development of numerous forms of bacteria.

The oral germs linked to gingivitis and periodontitis are very effectively combated by it. These two gum diseases are inflammatory.

The common cause of respiratory infections, the respiratory syncytial virus (RSV), may also be successfully treated with fresh ginger.

Can Assist With Osteoarthritis

Osteoarthritis (OA) is a common medical condition prominent in older people. In this people suffer from the stiffness and discomfort in the joints. Including ginger in the diet can aid in alleviating pain. Ginger is a traditional herbal medicine is highly beneficial but can cause minor stomach issues such as stomach irritation. Aside from this, it can also become a problem for some people due to its bitter taste.

Therefore, you need to be careful in the dosage that you take daily. Multiple studies suggested that that people who took dosage of ginger extract or in the form of capsule in the range of 170 mg to 255 mg felt a relieved of the joint discomfort. Some of the participants did report slight discomfort, but these were lower in number. [1]

Colds Are Cured With Ginger

Although ginger isn't a miracle treatment for your sore muscles, it does help to reduce pain over time. In addition, people who ate ginger regularly had a lower risk of experiencing sore muscles the following day than those who didn't.

Ginger And Your immunity

Chronic inflammation can compromise your immune system and make you more susceptible to illnesses. However, as ginger is both anti-inflammatory and packed with antioxidants, it is an excellent immunity booster. What’s more, ginger is rich in antibacterial and antiviral properties too. This is another way in which its boosts your body’s immune response, making it doubly beneficial.

The health benefits of ginger are innumerable. Take a look at the ways in which it benefits you in addition to boosting your immunity.

If you’re suffering from nausea or morning sickness, turn to the mighty ginger to get instant relief. While it may not be helpful if you’re vomiting, sipping on ginger water benefits those feeling nauseated immensely, especially those who are suffering from nausea as a result of chemotherapy. That said, if you are pregnant, you should consume ginger in moderation, and only once you consult with your doctor. This is because it could be harmful to those who are in the final stages of pregnancy or have had miscarriages in the past.

Ginger Lowers The Risk Of Cancer

If free radicals aren’t controlled within the human body, they multiply and lead to cellular damage. This in turn can culminate in several conditions, one of which is cancer. As mentioned earlier, ginger is a rich source of antioxidants. This means that it lowers oxidative stress within the human body by combatting free radicals. As a result, it lowers your risk of suffering from cancer. This is especially true for colorectal cancer, as per recent studies. One of the key ginger health benefits is that it helps relieve pain that women experience while menstruating. Astonishingly, a 2009 study found that ginger was as effective in treating menstrual cramps as anti-inflammatory drugs, especially when taken during the first 3 days of one’s menstrual period.

Studies indicate that both oxidative stress and chronic inflammation negatively impact brain function and are the primary causes of Alzheimer’s. Ginger is a single ingredient that combats both inflammation and oxidative stress. Studies have shown that consuming ginger regularly can protect you from age-related decline in brain function. Moreover, animal-based studies suggest that ginger prevents inflammatory responses from occurring in your brain. Therefore, it is possible that ginger can help address Alzheimer’s.

Painful menstrual periods can be somewhat reduced by consuming ginger throughout the first 3–4 days of a menstrual cycle. It appears to function similarly to various pain relievers, such as ibuprofen, mefenamic acid, or Novafen. Combining ginger with medications like mefenamic acid also seems to be beneficial.

Some people with osteoarthritis may find a minor reduction in pain with ginger taken orally. However, rubbing ginger oil or gel on the knee doesn't appear to be of much help.

Some people use ginger orally during pregnancy to lessen nausea and vomiting. However, it might function less quickly or effectively compared to other antinausea medications.

Taking ginger can not prevent motion sickness up to four hours before departure.

Although there is interest in utilising ginger for a variety of additional conditions, there is not enough trustworthy data to determine whether it will be beneficial.

Ways To Add Ginger To Your Diet

You may also incorporate ginger into your diet salad dressing. Making a salad dressing is really easy. Just combine your preferred types of oil and vinegar with the necessary seasonings (i.e. salt, pepper, garlic). When combined with some fresh ginger in a blender, this simple and healthful dressing becomes a ginger-infused salad dressing, which is ideal on its own. Ginger can be grated or finely minced and added to tea. You should consistently practise this to help you stay warm, composed, and calm.

Ginger water is available in a variety of forms, including herbal water, tea, and juice. It can be sipped warm or cold. A person can also make their own ginger water at home.

Fresh ginger is used to make ginger shots, which are concentrated beverages. Depending on the recipe, different ingredients are used. Only fresh ginger juice is used in some shots; other ingredients may include lemon, orange, cayenne pepper, turmeric, and/or manuka honey. Fresh ginger root juice or freshly grated ginger combined with other juices like lemon or orange are used to make them.

Ginger supplements are now available in tablet form for those who would prefer the convenience of supplements or do not enjoy the taste of ginger. But it's ideal if you speak with a medical professional first. Based on your medical history and current medications, the doctor will advise you on how much ginger you can take each day without harming you.

If you don’t know how to up your intake of ginger, here are some suggestions.

The simplest way to increase your intake of ginger is to eat a capsule. However, it’s best that you consult with a doctor before you do so. He/she will tell you how much ginger you can safely eat in a day based on your health condition and existing medication.

A ginger shot benefits your body in the same way as ginger juice benefits your body—both offer the goodness of ginger in a concentrated manner. While some recipes feature only fresh ginger juice, others include honey, for instance. If you’re looking to make a ginger immune booster shot, combine it with ingredients that also bolster your immunity, such as lemon and turmeric.

If a ginger shot is too strong for your palate, try eating salads with a ginger dressing. You can either add fresh ginger or dried ginger, depending on what you prefer. Either way, it will give your body a healthy boost.

One of the most palatable ways to add ginger to your diet is to make a ginger water or ginger tea. Instead of simply adding ginger slices to water, heat the two ingredients together. Ginger health benefits multiply when you steep the ginger in hot water, as this process encourages the ginger to release beneficial compounds.

As you can see, adding ginger to your regular meal routine can only benefit you and leave you with nothing to worry about. To assist you, here are two healthy ways to incorporate ginger into your diet:

Place a saucepan over a high temperature and add the ginger, water, tea, and fresh mint. When it begins to simmer, lower the heat to a low flame and allow it to do so for five more minutes (If you want a strong flavor, simmer the water for 10 minutes). After the tea has completed simmering, turn off the heat and strain the tea through a strainer.

A teaspoon of honey should be added after you pour the desired amount into your mug. After the tea has completed simmering, turn off the heat and strain the tea through a strainer.

Side Effects of Ginger

What health issues could ginger cause? It's typically safe and unlikely to have any negative side effects in the majority of people when consumed in moderation. However, when taken in high quantities, it might have adverse effects for some people, including diarrhoea, heartburn, poor breath, and abdominal discomfort.

There is a small chance that some people will also be allergic to ginger. Stop using right away and consult your doctor if you have any signs of a food allergy, such as hives, swelling, or trouble breathing.

A ginger essential oil may irritate some people's skin when applied topically. Applying a modest amount of oil first will let you do a skin patch test to determine whether your skin is sensitive.

Additionally, while taking capsules, always begin with a low dose and gradually increase it to determine your tolerance. Keep to the suggested dosage and cut back if any unpleasant side effects occur.

Ginger is an excellent home remedy for many ailments. However, if you relief or if you want specific information about a certain aspect of ginger, such as ginger benefits for men, consult a doctor. Find the right doctor for your needs, be it a general practitioner or a nutritionist on Bajaj Finserv Health. Book an online doctor consultation or in-person appointment and also enjoy special discounts from select healthcare providers.

Sugarcane Juice Benefits and More: What Makes it Special?

Top 10 High-Protein Breakfast Recipes: All You Need to Know

Milk Protein Isolate: 4 Top Things to Know About It

Top 10 Protein Rich Fruits to Add to Your Diet Meal