Cinnamon is a spice acquired from the inner bark of cinnamon trees. It adds flavor and aroma to a variety of dishes. There are many cinnamon benefits that you should be aware of. In fact, it features among the immune-boosting herbs and spices. As per a study, cinnamon reduces glucose and LDL cholesterol in people with type 2 diabetes.

There are many home remedies that use this spice for its medicinal qualities. Some even prepare a cinnamon drink for diabetes. Read on to know more about it and the different health benefits of cinnamon for diabetics.

Additional Read: 8 must-have foods that should be part of a diet for diabetics

Cinnamon promotes healthy living and you shouldn’t ignore its benefits. Here is a list of the health benefits of cinnamon.

Serves as a source of vital nutrients:

Cinnamon is rich in 3 main medical properties, which are:

These help digestive health and maintain blood sugar levels. In a study of 26 herbs and spices, cinnamon had the second-highest antioxidant content after cloves [3]. This helps the body reduce oxidative stress, which also decreases risk of chronic illnesses like type 2 diabetes. A study revealed that 500mg of cinnamon extract taken daily for 3 months reduced stress in adults with prediabetes by 14% [4].

Cinnamon decreases LDL cholesterol and triglycerides. It also increases HDL cholesterol. High cholesterol is a common complication that is easily helped by having this spice. Another issue is that diabetics are at a greater risk of heart disease. Cinnamon can keep this under control and helps maintain healthier cholesterol levels. 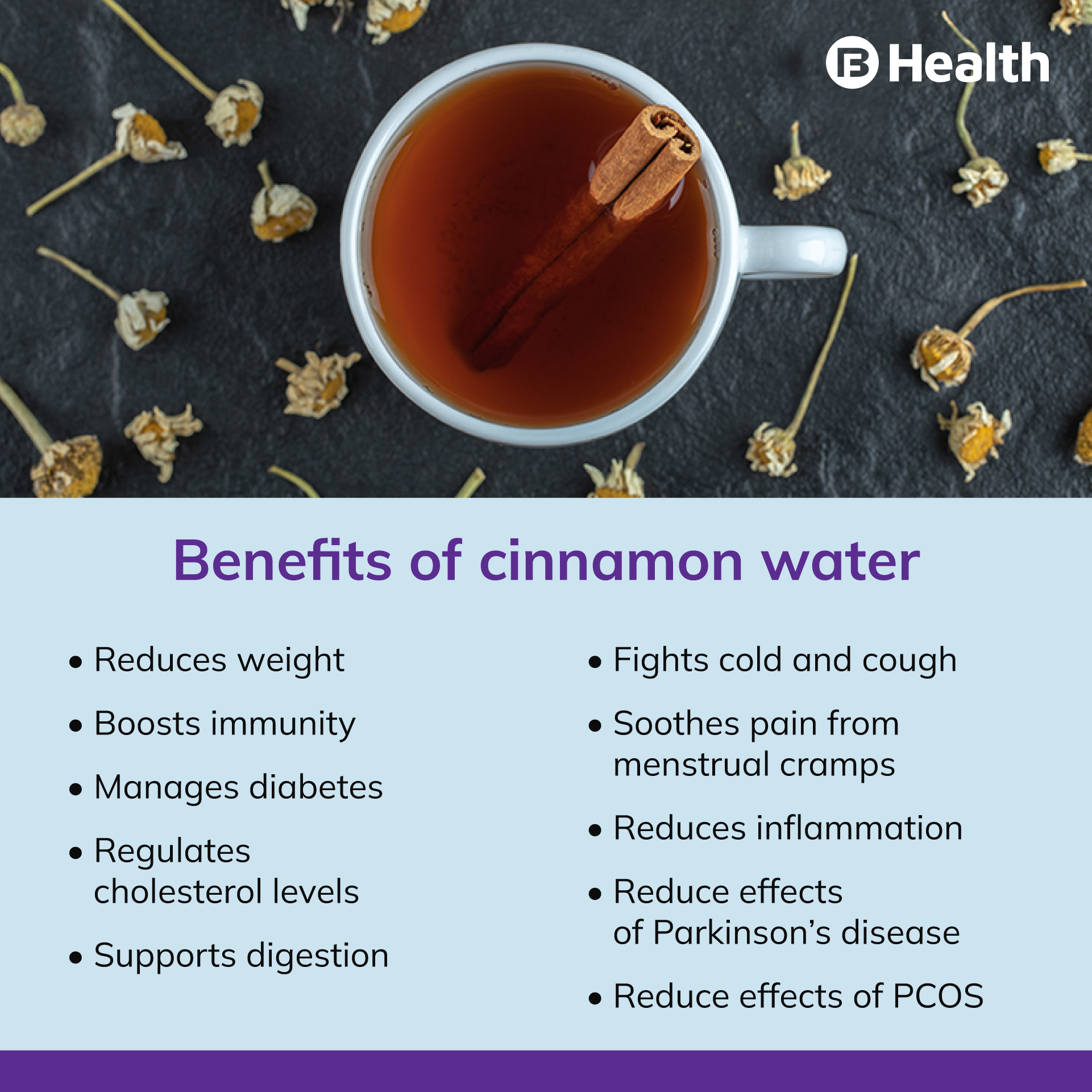 It also leads to an increase in good cholesterol levels [5]. Of the many cinnamon benefits, lowering fasting blood sugar levels is important for diabetics. It helps regulate and maintain optimal levels naturally.

Cinnamon lowers blood sugar levels by increasing insulin sensitivity. It makes insulin more efficient at moving glucose into cells. In a study of 7 healthy lean males, cinnamon aided in glycemic control and insulin sensitivity. The same study reported that the effects were immediate and lasted for 12 hours [6]. As such, cinnamon helps lower blood glucose and can prevent diabetes by imitating the effects of insulin. A lowered sensitivity to insulin causes various health issues. This can be addressed by adding cinnamon to your diet.

Eating meals high in carbohydrates increases your blood sugar levels. A high sugar level causes oxidative stress and inflammation. This has a negative effect that can lead to excessive damage to your cells. It can also increase the risk of chronic diseases. Cinnamon helps keep this in under control.

It keeps blood sugar levels after meals at a healthy range. In fact, consuming 6g of cinnamon with rice pudding delays gastric emptying without affecting satiety [7]. Another study found that 2g of cinnamon for 12 weeks can reduce HbA1c along with the systolic and diastolic blood pressure.

To make a cinnamon drink for diabetes, follow these steps.

This is the simplest way to make the cinnamon water recipe for diabetes. There are other ways of adding cinnamon to your diet as well. But, before you opt for any of these, consult your doctor.

Although cinnamon water benefits people with diabetes, it is no substitute for medical care. You should consult with your doctor before taking any cinnamon supplements or making dietary changes. Consult with the best health professionals near you on Bajaj Finserv Health. Learn more about the cinnamon benefits for diabetes and various other home remedies for illnesses in just a few clicks.  For preventing diabetes you can avail diabetes health insurance from the Bajaj Finserv Health

Is Papaya Good for Diabetes? Nutrition Facts and Benefits

9 Best Foods to Eat and Avoid with Diabetes

Wolfram Syndrome: 3 Things to Learn About This Rare Disease