Diastema occurs when there is space between teeth. While it can occur in any tooth, the gap between teeth in the upper front jaw is more common. Read to know more about diastema causes and treatment.

A study reveals a higher incidence of midline diastema in the South Indian population, which is visible in the middle of the mouth when you smile [2]. Diastema is a major cause of aesthetic concerns. According to a report, the prevalence of this type of diastema makes it more likely for patients to undergo teeth gap treatment [3].

For orthodontic problems like cracked teeth, stained teeth, or even sensitive teeth issues, it is vital to meet a dentist. After all, you wouldn't want to lose that beautiful smile on your face! While brushing and flossing can help prevent a gap between teeth as you age, it is important for you to be aware of diastema causes and control them. To know more about diastema causes, symptoms of diastema, and teeth gap treatment, read on. 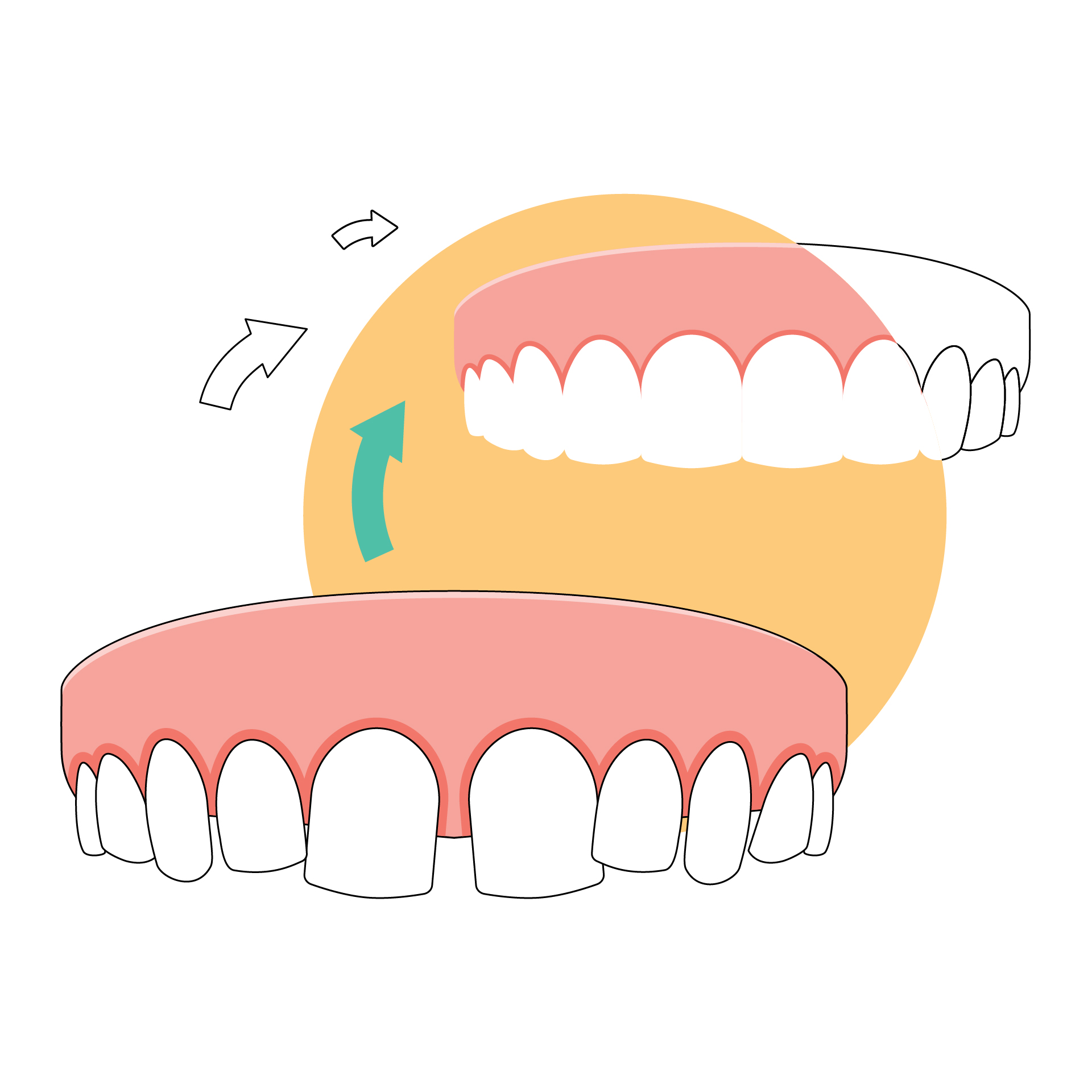 Genetics plays a major role in causing diastema. If any of your family members are prone to a diastema, there is a high incidence of you acquiring it. One of the crucial diastema causes is the link between your teeth and jawbone size. When your tooth is smaller compared to the size of your jawbone, there is a high chance of a gap between teeth. The size of your jawbone and teeth is inherited genetically, and thus diastema is often hereditary.

Another reason for diastema could be a missing tooth or irregularly shaped teeth. This causes a gap between teeth and is more frequently observed in children. As their permanent teeth develop, this gap recedes, and diastema is no longer an issue. In case there is a bacterial accumulation between your gums and teeth, it can affect the teeth bone and change its structure too. This also causes diastema.

There are a few diastema causes attributed to certain habits related to thumb sucking and swallowing. If you follow an incorrect swallowing process, it can create space between teeth and cause diastema. Here, you may observe a tongue thrust reflex in which your tongue presses hard against your front tooth during swallowing.

Thumb sucking is one of the common diastema causes that results in the protrusion of your front teeth. Though this childhood habit may seem harmless, the space between teeth also widens gradually as the teeth protrude. Timely correction of this habit can reduce the risk of causing drastic shifts in your teeth structure and reduce your risk of diastema.

In diastema, it is normal for you not to notice any symptoms. If you are maintaining good oral health, the only main symptom of diastema is the space between teeth. In case you have bleeding gums or other gum infections, this may result in diastema. In gum disease, the bone supporting your teeth may also get inflamed. This results in the loosening of the teeth that create a gap between teeth, causing diastema.

When diastema is caused due to this reason, here are a few symptoms you may observe. 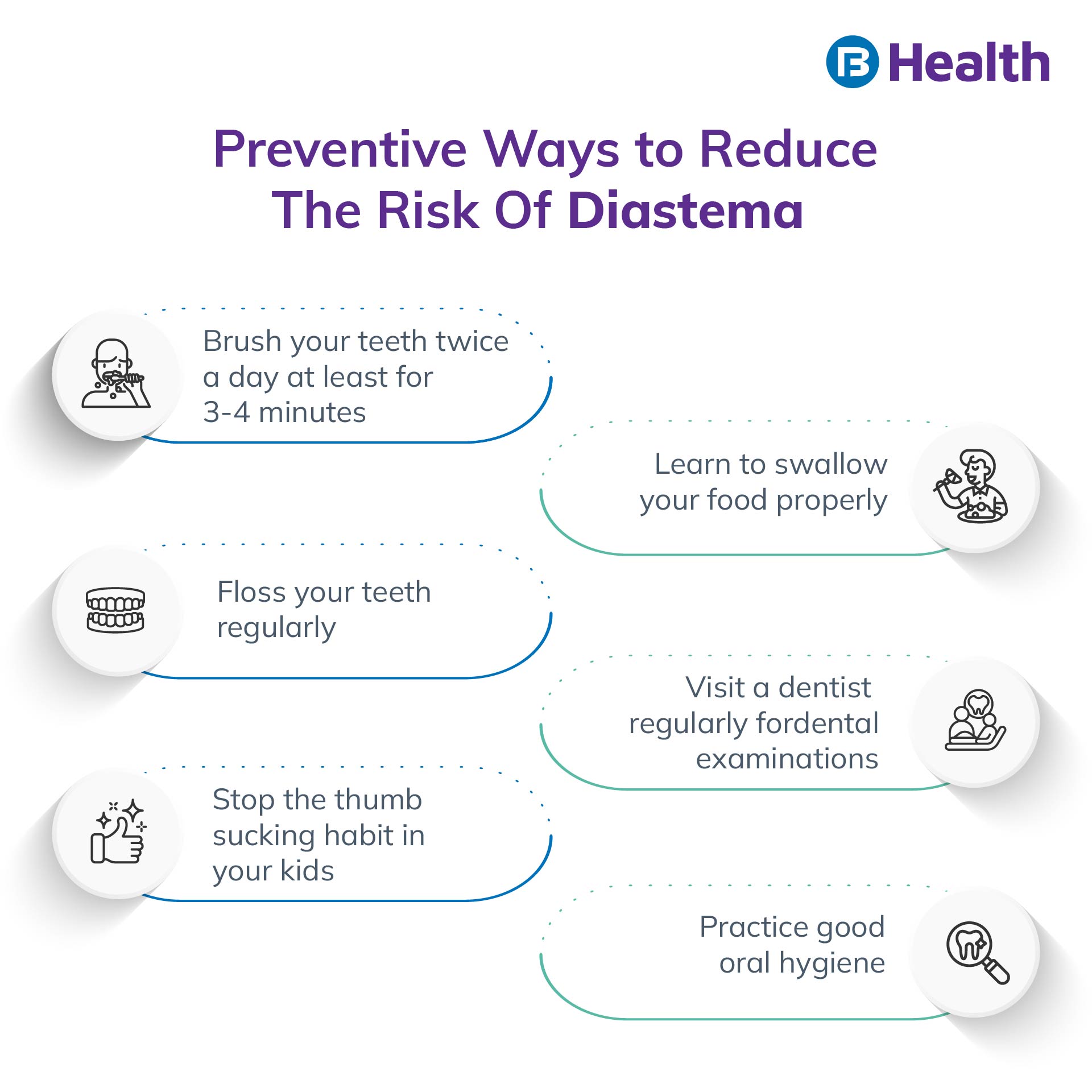 Since the space between teeth is visible, diastema does not require any additional tests. During your routine oral examination, your dentist can diagnose diastema and suggest a suitable teeth gap treatment plan. However, you can also notice it easily when you floss or brush your teeth. Timely medical intervention can prevent the gap from widening and rectify diastema.

Here are a few cosmetic treatment options for diastema:

If the gap between teeth is large, you may have to use braces to align your teeth physically closer to one another to correct diastema.

In this diastema treatment method, the gap is closed using a composite resin material having the color of your teeth. After fixing the gap, your teeth are polished and shaped to improve their overall appearance.

The tissue connecting your lip and gums is known as the frenum. The excessive thickness of this tissue can create a space between teeth and cause diastema. With the help of frenectomy, this tissue band is released.

These help in closing the gap in diastema and giving a more uniform appearance to your teeth. Veneers are made up of ceramic and adhere to the front surface of your teeth.

If the diastema is due to a missing tooth, you may require a dental implant or a bridge to be fixed on your teeth. An implant helps replace a missing tooth and involves the insertion of metal screws to your jawbone. In a dental bridge, a false tooth is attached to the teeth on either side of your gaps.

If diastema occurs due to gum disease, you may have to take antibiotics or undergo procedures like root planing and scaling. While scaling helps eliminate bacteria from your gums, root planing involves smoothening your teeth' roots. This helps you control diastema due to gum infections.

While some cases of diastema are unpreventable, you can reduce the risk of acquiring diastema by maintaining proper oral hygiene. Avoiding habits like thumb sucking and visiting dentists regularly can minimize your risk of developing diastema. If you are experiencing diastema or any other orthodontic problems, connect to reputed specialists on Bajaj Finserv Health.

Get a doctor's consultation and resolve dental issues like cracked teeth or diastema. You may use the app or website to book the appointment and meet a preferred dentist to rectify diastema or any other orthodontic issues. Maintain your charismatic smile by solving your dental problems without delay. Utilize the Bajaj Health Card to receive treatment for your Diastema, pay your medical bills, and turn your health card bill into an easy EMI.

Oral Thrush and Everything You Need to Know About It

Black Spots on The Tongue: Know The Causes and Treatment?

Common Reasons for Stained Teeth and their Treatments

Sensitive Teeth: Do You Know These Easy Remedies?