Haritaki is a natural remedy for several diseases. Haritaki powder is good for your skin, immunity, bowel movement, and more. Read to know more about the benefits of Haritaki and Haritaki uses to apply them to your diet.

Haritaki is a fruit of the myrobalan tree of the species Terminalia chebula, commonly referred to as chebulic myrobalan, which is native to India but they are also widely distributed in Srilanka, Nepal, and China. The fruit is less than an inch in size. Haritaki is known by many names in different regions, such as hard, haradey, kayakalpa, and kadukkai. "Kayakalpa" means rejuvenation, and in this case, Haritaki is a rejuvenator. It is one of the most well-known and important herbs in the indigenous medical systems of India, Ayurveda, and Siddha medicine. Haritaki is termed the "king of herbs" by Ayurvedic healers. This beneficial fruit has so many applications, including holistic healing. Haritaki uses are extensive in Ayurveda and Siddha practices. Its laxative, purgative, antioxidant, astringent, and anti-bilious nature makes it easier for consumption and curing several ailments. Read on to know how Haritaki benefits to health in different ways.

How is Haritaki collected?

Haritaki is often collected in its raw stage when the fruit is green in color. The fruit is oblong. It is dried until it gets dark in color. Then they are powdered to make them into Ayurvedic medicine. The potency of the fruit depends upon the fruit, where it grew, the color, and the shape of the fruit. Fruits are collected by local communities and are supplied to Indian pharmaceutical companies, which has been the norm in India for many years.

Haritaki benefits that you need to know

Haritaki is a valuable herb in Ayurveda medicine because of the versatile health benefits it offers. Ayurvedic practitioners suggest people include Haritaki powder in their diets because of how it balances the elements like ether and air. The ether and air combined are said to cause 80% of all diseases in Ayurveda. It treats a list of illnesses, including chronic and short-term diseases. Haritaki powder is rich in nutrients and has the necessary elements needed for your body. Some of them are as follows.

Haritaki is just one part of an Ayurvedic blend called Triphala. Bibhitaki and amla / Indian gooseberry are the others. Consuming Haritaki with different items can pacify air, fire, water, and earth elements in Ayurveda, such as taking it with ghee for air, little sugar for fire and heat, and a pinch of rock salt for water and earth.

Haritaki benefits overall health and treats a variety of illnesses, as mentioned above. It also rejuvenates and nourishes all the tissues and organs while supporting immunity and metabolic activity. It can support libido and improve male and female fertility. A large number of eye problems are treated with Haritaki, including watery eyes, dry eyes, stye infection, watery eyes, inflamed eyes, and conjunctivitis.

A 2017 study states that myrobalan fruit consists of several compounds that help in heart health, digestive support, and wound care. [3] Compounds that support applications are as follows.

The antioxidant property-filled herb is regenerative and rejuvenating. Haritaki's benefits include beauty as well as it has the potential to improve your skin, hair, and nail health. You can put an end to various skin infections with Haritaki, like pimples, boils, rashes, acne, etc.

A 2019 research states that Haritaki helps address a lot of skin diseases classified by Ayurveda. [4] It can be used daily for cleansing as it will improve your skin's health. Take some powder of Haritaki and make a paste with some water or rose water. If it dries, add a few drops of oil. Cracked feet also get alleviated by mixing Haritaki powder, ghee, and water. The research is published in a 2014 study. [5]

Haritaki powder is also used for hair dyes, according to a 2021 study that found texts from classical Ayurveda. There were no side effects present with such formulations as it has been used for generations. Making use of Haritaki on hair not only darkens the hair but also softens it, according to the research. [6]

Since Haritaki's benefits include antimicrobial properties, it helps with nail bed infections, according to a 2019 study. [7]

Additional Read: How to reduce cholesterol without meditation 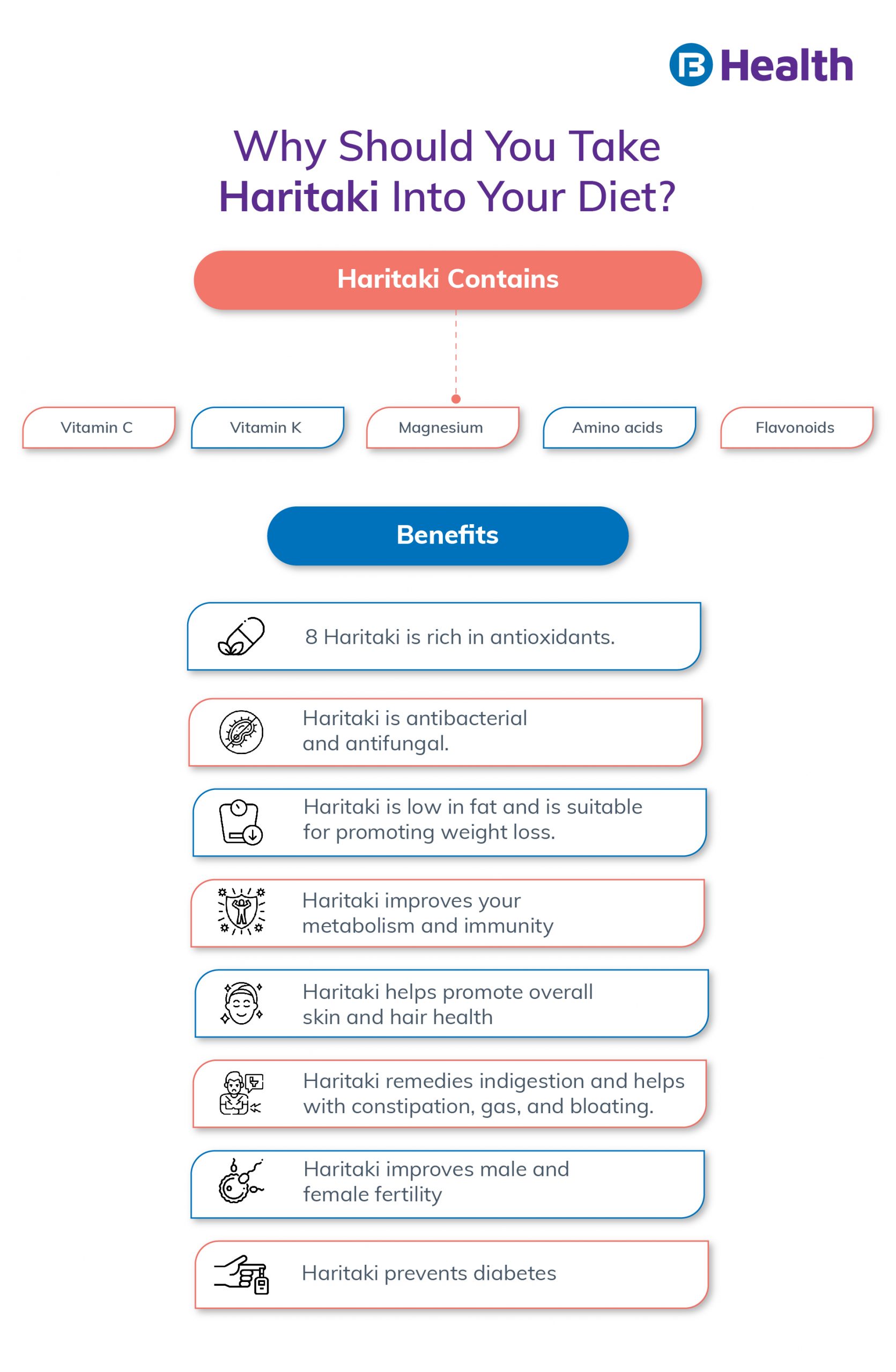 The marketplace offers various forms of Haritaki, not to mention the most used form of Haritaki powder. It is a paste and jam-like formation that can be mixed with sugar syrup or ghee, or water. Haritaki is also prescribed in the form of a tablet or as herbal oil, depending on the ailment. It depends upon the individual's needs.

Vedas, the ancient Hindu scriptures, paint a picture of how Haritaki came to be. It starts from a drop of nectar that fell from the cup of Lord Indra, which sprouted the deciduous tree. Haritaki can be interpreted as something that embodies Hari or Lord Shiva. He is one of the three Hindu gods who make creations, keep them, and destroy them. This herb is included in holistic health care as well, especially for dosha imbalances. A lot of people believe that the herb is vital for spiritual balance as well.

Haritaki is called a big golden fruit in Buddhism. It also has a connection to Budhha. Haritaki is believed to have the main value of Buddhism, which is compassion. Haritaki is known for its regenerative potential as it cures a variety of ailments. Mahayana Buddhism has The Medicine Buddha, who is an important icon in it. He holds the Haritaki fruit in both of his hands.

Safety and precautions to look out for

Haritaki benefits are plenty. It is generally safe to have Haritaki powder in one of its forms, but if you overconsume it without consulting an ayurvedic doctor or healer, it could cause disorders. Dehydration, diarrhea, jaw stiffness, and fatigue, among others. Patients taking sugar-reducing medicines should check with their doctors before consuming Haritaki. Pregnant women and breastfeeding mothers are also forbidden to use any kind of haritaki formulation without a doctor's consultation. Do not make use of Haritaki under these circumstances.

Knowing how having Haritaki benefits your health, you can easily include them in your daily diet or come up with an Ayurveda autumn diet for weight loss to get needed nutrition. But it is always safe to consult a doctor even though it is safe to consume haritaki powder regularly. Having too much of anything is never good for your overall health. You can add other elements to your food like Ajwain, which is beneficial for your overall health.

To follow a healthy and balanced diet, talk to a nutritionist or an Ayurvedic doctor of your choice today. To make this process easy for you, get a doctor consultation with a click on Bajaj Finserv Health for an online appointment. This will help you understand what is right for being healthy. Or get the consultation if you have any other concerns like indigestion. You can also look up home remedies for indigestion on the Bajaj Finserv Health site. The best thing here is that you can book a Tele-consultation from the comfort of your home and get all the advice you need online. With the convenience and safety this offers, you can start taking the best care of your health!

Guggul: Important Guide of Benefits, Dosage and Side Effects